The Importance of Learning CSS Basics : A Word from Our Developer 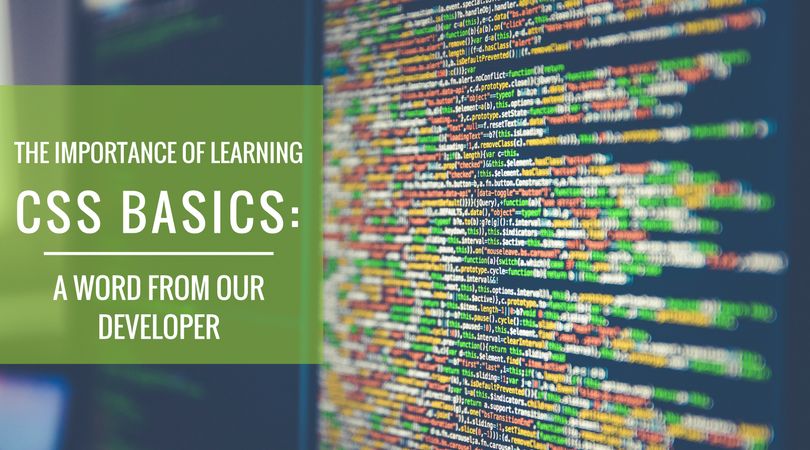 We’ve all heard it a thousand times, “You have to walk before you can run”. You have to learn the basic aspects of something before you can move on to the more complex ones. This holds true for almost everything in life, including learning how to write proper CSS (the style language that defines fonts, colors, margins, background images, etc. on a website).

If this is the case, why are a growing number of front end developers jumping into the latest and greatest development techniques when they haven’t even mastered the basics of CSS? And what does it mean for you if an eager-beaver developer is the one building or maintaining your website? I asked our Senior UI/UX  developer, mbrand, for his take. Read on to find out what he had to say!

Matt, why do you think front end developers aren’t taking the time to learn the basics?

Many FED’s (front end developers) are trapped in the mindset that things need to become streamlined and faster. They just look for the fixes that will help them get things done as quickly as possible.

Truly understanding the basics of CSS can be very, very time consuming. Many FED’s don’t want learn how to write proper CSS by hand and get a better understanding of all CSS properties and how they interact with each other. They don’t want to take the time that is needed to actually learn and understand what they are doing, they just do it.

If they aren’t writing basic CSS, what are they doing instead ?

They are doing a few different things, like playing with the new CSS Grid Layout feature. Or they are using SASS, SCSS, or LESS (which are all different types of CSS that are written in a more programmatic way).Or they are using plugins that will bloat a site with hundreds or thousands of lines of unneeded code.

Can you tell those of us who aren’t FED’s, what these issues are?

Well, if any of the things I just mentioned are done improperly, it can issues with the site later on down the road. And if something breaks  and you don’t have a good understanding of what wasn’t coded properly and what went wrong, it can be time consuming and tricky to fix. Usually these issues could have been easily prevented if the build had been done using CSS techniques that have been around for years.

Another issue with newer techniques like Grid Layouts, SASS, SCSS and LESS is that they might not be supported by all browsers (but CSS is, and has been for a long time). If a browser doesn’t support the technique you used, the web page won’t display properly, so any time that you might have saved, is lost when you have to go back in to your code to fix things.

And those plugins that I mentioned – that have all those lines of unneeded code – they can slow down a site’s loading speed. No one wants that.

So, it sounds like learning the basics is simply the safest bet then?

I’ve been an FED for almost 10 years, I’ve seen techniques come and go, but the one thing I can say for certain is that the basics are here for the long haul. Might as well master them.

So what’s the moral of this story? Make sure that the developers building your website have a thorough understanding of basic CSS techniques and that they put that knowledge to good use. If not, your site could have long term issues or be bogged down with a lot of unnecessary code!